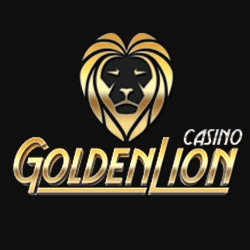 Golden Lion is a classily designed casino designed for the American market. It is licenced via the Dutch Caribbean island of Curacao, so it does not operate under the jurisdiction of the UK Gambling Commission.

In most things, it seems as if the Americans are ahead of us: what is new or popular in the United States will soon be arriving with a fanfare over this side of the pond. In the online casino industry however, this is not the case. The regulatory climate stateside has meant that online gambling has been effectively prohibited for the vast majority of Americans. Recent legislative moves though have given hope that gambling regulations will soon be lifted, or at least softened. This has led to some brave American operators to set up their online casinos early in an attempt to pre-empt the market.

All this means that these casino can seem a bit underwhelming for us Brits, who have been enjoying online gambling for a couple of decades. Golden Lion Casino is a classic example of this. The software is provided almost entirely by the operating company, unlike over here, where most casinos licence their games from independent software designers.

So you won’t recognise many (if any) of the slots. Rival software is hitherto largely unknown this side of the Atlantic, although there are a few Betsoft games which are available here. There is no Live Casino either. There is a reasonable range of video table games though, particularly Poker, with a few Baccarat, Blackjack and Roulette formats to keep us going. Other traditional American games like Craps and Bingo (our 90- ball version is also included as “European Bingo”) are also available here.

Payments are in dollars, and minimum deposit limits are set much higher than we are used to, at $100. The minimum withdrawal amount is also a hundred bucks. Payment options are more familiar though: Visa and MasterCard, Neteller and Paysafecard are all accepted here. You will also be limited to a maximum weekly claim limit of $2,000.

Support is best accessed here via live chat. This is available round the clock. There is a toll free number to call, but this only applies to United States based players, so it will be very expensive for United Kingdom residents unless you are using Skype. The FAQ section is what could best be described as minimalist by European / UK standards.

It is difficult to recommend this casino on any level for the United Kingdom market. It is not covered by the UK Gambling Commission, It doesn’t accept British currency and it doesn’t have many games, and certainly none of the slots we’re familiar with over here.

So this is not a casino for the typical British online gamer, although it might attract some players who are looking for something different, with a whole new roster of unfamiliar games. Plus there’s the potential glamour of playing with dollars at a real American casino…

Other Bonuses For Golden Lion Casino