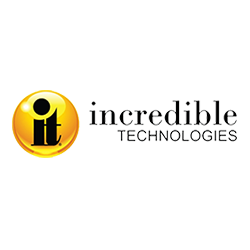 This American company is a designer and manufacturer of video and casino games. Founded in 1985, Incredible Technologies was predominantly focused on coin operated games in its early years. As the market for these kinds of games slowly faded, the company began to diversify into software for casino games in 2005. These new games were designed both for real world cabinet type games and also for consoles and online gaming.

The company continues to work mostly with sports designs. Early games focused on popular American games like Ten Pin Bowling, Baseball, Basketball, Tennis and Horse Racing. But in truth the company struggled to find a hit and made little money in the beginning.

Fortunes began to turn in 1989 with the release of the company’s Golden Tee Golf game. This too was slow to take off, but its realistic trackball design and impressive software saw the game gradually increase in popularity throughout the 90s. It has since undergone several major branding upgrades, with the fifth being the most recent: Golden Tee Live. Incredible Technologies continues to run an annual online Golden Tee Golf World Championship, with a final held in Las Vegas with a winning prize of $30,000 up for grabs.

Today, the company has a much broader portfolio, including Poker Keno and various video slot games. The focus remains on real world casino cabinet games and amusement arcade games, but the company is beginning to venture into the online world. Some casinos are beginning to offer Incredible Technologies games with more expected soon.

Incredible Technologies continues to be run by its original founders, Richard Ditton, who was originally a software engineer for NASA, and Elaine Hodgson, who remains the company’s President and CEO. It is responsible for the employment of around two hundred people, mostly based at the company’s headquarters in Chicago, Illinois. It also has a satellite office based in Las Vegas.

List Of Casino Sites With Games From Incredible Technologies